The Christly Way-Science, Not Doctrine

Christ Jesus announced the kingdom of heaven—the realm of invariable harmony—by his acts as well as his words. He was unequaled as preacher and prophet, but he was also Exemplar and Way-shower. His message and methods stand out in sharp contrast to the practices of the scribes and Pharisees, which he denounced repeatedly as hypocritical. Exponents of doctrine and dogma, devoted to the minute interpretation and application of the Hebrew Law, these learned men had fallen into the trap of a merely formal "correctness." What Jesus denounced in them was their emphasis on the appearance of rectitude—self-righteous legalism made more important than heartfelt love for God and man. Jesus said of them, "They bind heavy burdens and grievous to be borne, and lay them on men's shoulders; but they themselves will not move them with one of their fingers." Matt. 23:4;

How different was the "good news" the humble Nazarene brought to mankind: "Come unto me, all ye that labour and are heavy laden, and I will give you rest." 11:28; 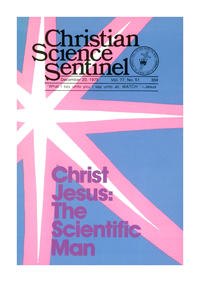