I turned to Christian Science for healing of a nervous breakdown...

I turned to Christian Science for healing of a nervous breakdown after being under a doctor's care for several months without any visible improvement. A friend, who was a Christian Scientist and concerned about my condition, gently spoke to me about this religion, of which I had never heard. Because of my respect for her true friendship and kindness, I did some inquiring, and learned that a Christian Science practitioner lived right in my own community. So I called her and told her the story. Thus began a new life for me.

At that time I also had a large goiter on my neck. It disturbed my friends, and I was constantly advised to have it removed through surgery. I had consulted with a specialist about this problem, and the surgeon's verdict was that only through surgery could this particular type of goiter be permanently removed. When I told the Christian Science practitioner about this, she talked to me about not seeing it. This sounded fantastic when the material evidence was so prominent and my friends were so worried and insistent that I do something. It was recommended that temporarily I have dresses made with high necks. This I did, and it stopped tongues wagging, and quieted the tension while the prayerful treatment of the practitioner went on. 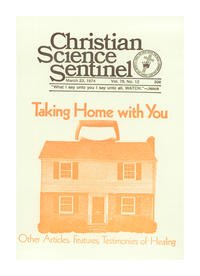