Supply: The Law of Love

Throughout history it has been generally believed that man is material, mortal, limited in every way. But through the discovery of Christian Science it is becoming known that man is the reflection of God, infinite Mind. By applying this truth in our lives we reverse this limiting belief of mortality, and its attendant problems begin to disappear. Where to human sense there seems to be discord, we find in God, Mind, universal, all-encompassing harmony; in place of disease, health; and instead of lack, overflowing abundance of good.

Many would scoff at such idealism as unrealistic or irrelevant. However, the teachings of Christian Science are not based on wishful thinking or mere optimism but on spiritual facts revealed to us in the Bible: that God, the one perfect Mind, is infinite good, Life, Truth, and Love, and that His creation, including man, expresses Him. 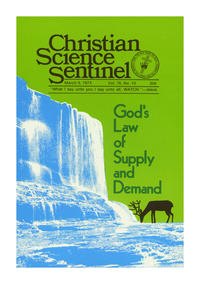