During a football practice in high school, my left foot was ...

During a football practice in high school, my left foot was accidently cleated several times by other players. That night the foot swelled greatly, and I was unable to fit it into any of my shoes. Some of my teammates and coaches suggested I have the foot X-rayed, as it might be broken. The prospect of a broken bone made me realize the necessity of consulting either a medical doctor or a Christian Science practitioner, so I made the decision to rely solely on Christian Science and phoned a practitioner that night.

The practitioner emphasized that what appeared to the physical senses as a broken foot was actually nothing more than a false suggestion and I needed to replace this suggestion with the truth of my spiritual being. This was an opportunity for me to progress in my understanding of my relationship to God, which could never be broken. 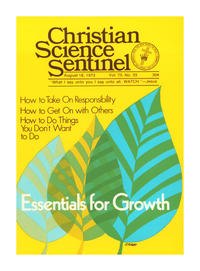