I attended a Christian Science Sunday School when I was a boy...

I attended a Christian Science Sunday School when I was a boy, but by the time I was in the eighth grade I had stopped attending Sunday School because of my lack of understanding of what they were trying to teach me.

Although I remembered some of the truths learned in Christian Science, I began experimenting with drugs at the age of seventeen. A few weeks after my twentieth birthday I was found under the influence of drugs, arrested, and taken to the hospital where I spent eight days under protective custody, and then was released on bail. I had been using drugs steadily for three years, and was convicted for possession of drugs and being under the influence of drugs.

Send a comment to the editors
NEXT IN THIS ISSUE
Testimony of Healing
It would take many pages for me to testify fully to the blessings... 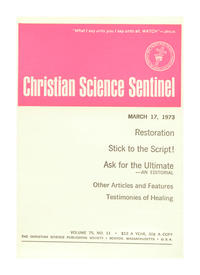