Many years ago, while hundreds of miles from home, my father...

Many years ago, while hundreds of miles from home, my father was involved in an automobile accident and was taken, unconscious, to the nearest hospital in an ambulance. X rays showed a severe skull fracture. My mother flew to join him the next day, and I followed later. Although he did know something of the teachings of Christian Science, my father was not a Christian Scientist, and my mother had to agree, eventually, to the doctors' urging for an operation to be performed. After it, one of the surgeons told my mother that they had had to remove a damaged portion of my father's brain, from that part which medical science says controls coherency of thought and speech. The medical beliefs voiced at that time were very grave and extremely limiting.

My mother was being supported by the prayers of a dedicated Christian Science practitioner throughout this experience, and she and the practitioner refused to accept the medical predictions. Together they prayed to behold more clearly the man that God had created whole, perfect, and entirely spiritual. My mother's steadfast courage will always be a shining example to me.

Send a comment to the editors
NEXT IN THIS ISSUE
Testimony of Healing
For the many blessings that Christian Science has brought to... 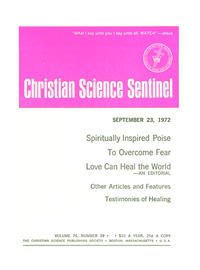