Some years ago, when one of my children was just a baby, she...

Some years ago, when one of my children was just a baby, she developed a severe case of eczema around her neck, on her arms, and on other parts of her body. During the following months we had treatment from a Christian Science practitioner, and I prayed to see the unreality of the condition. But I also spent a good deal of time looking at it and being disturbed by it, with the result that not much progress was made. Quite some time went by, and I felt fairly discouraged about the situation.

Finally, one day, while studying the Lesson-Sermon for that week on the subject "Spirit," I read a passage from Galatians, in which Paul says (3:3), "Are ye so foolish? having begun in the Spirit, are ye now made perfect by the flesh?" Suddenly it became clear to me that all this time I had been trying to see the child's perfection in the flesh, instead of knowing that as a child of God she was already perfect and always had been, and that her perfection could not be increased by any change in matter. A correlative passage from Science and Health by Mrs. Eddy is (p. 72): "Perfection is not expressed through imperfection. Spirit is not made manifest through matter, the antipode of Spirit." With this inspiration came a great feeling of release, and I found I was able to look at the child with joy. I was no longer disturbed by the condition but could focus my thought on her real spiritual nature. The problem began to disappear that day, and within another few days it was entirely and permanently gone.

Send a comment to the editors
NEXT IN THIS ISSUE
Testimony of Healing
While I was earnestly seeking a religion that could give me a... 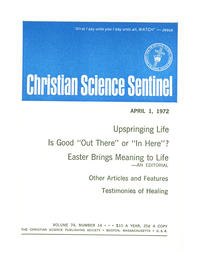