It is only because of the healing power of Christian Science

It is only because of the healing power of Christian Science that I am here to give this testimony.

Late one night I was driving home alone during a blinding blizzard. Suddenly visibility was lost as the drifts on the four-lane highway narrowed the usable area to one lane. My car and another struck head-on, and both were damaged beyond repair. Motorists who stopped to help aided the injured passengers in the other car but left me alone, as I appeared to be dead. Presently, a fireman who stopped at the scene looked me over and detected signs of life. He was willing to get involved, so he persuaded another couple to use their car to take me immediately to a nearby university health center. However, no assistance could be given because of the obvious extent of the injuries. The trip was resumed to a hospital, where a cursory examination indicated a possible broken back, neck, and knee, severe head damage, and internal injuries. 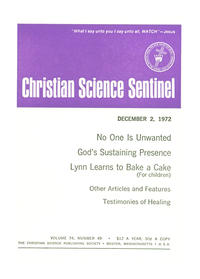