An Interview: with a Space Scientist

with contributions from Homer E. Newell

Men in their ignorance used to think they were the center of a fairly small universe. Does knowing that you are just a speck on a remote planet in the corner of one gigantic galaxy among billions make you feel insignificant?

No, one can feel both humble and important at the same time. The earth and universe are so wonderfully complex and beautiful, and mankind is a grand part of this! 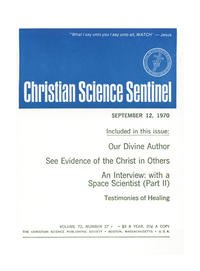