In May, 1963, I was working for the United States Civil Service

Thomas B. Browne with contributions from Elizabeth Browne

In May, 1963, I was working for the United States Civil Service. One evening I came home from work bent over. Due to intense pain I could not straighten up. As this had never happened to me before, I asked my wife to call a doctor so that I could draw sick pay. Three X rays showed arthritic symptoms all up and down my right leg. For two weeks I slept in a wheelchair because the pain was so extreme that I could not sleep in my own bed. Finally I asked the doctor if he really thought I could be cured. He replied that medical science had no cure for this ailment. I settled up my account with him and told him I wanted to do some thinking before having more treatments.

That night I prayed to God for guidance, as I thought I could not stand the pain any longer. Two days later our Civil Service personnel director knocked on my door. He said that our doctor had informed him that I would never be any better and could never work again. He said that if I wished to retire he had all the necessary papers for me to fill out and sign. He said he would step out to his car while my wife and I talked it over.

Send a comment to the editors
NEXT IN THIS ISSUE
Testimony of Healing
The reading of many inspiring testimonies of healing in the... 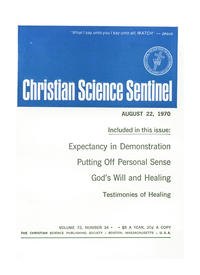