The Need for Form in Our Lives

Traditional forms are being challenged on every side. In society's manners and morals, as well as in music and art, the accepted norms and forms are being attacked, sometimes with intelligent purpose but often with an aimless destructive bent. Are we in the position of being reactionaries, defending the old modes, or are we bound to find new ways to do things, new forms of expression? Can we stand still in an age of such momentous movement?

The Christian Scientist should never be behind the times. He should always be seeking new ideas and new ways of expressing them. Such an attitude does not prevent him from reflecting law and stability or from enjoying the classics and the masters in art and music. But it does require him to prove that God is cause and is currently functioning as cause and that creation is going on ceaselessly. Mrs. Eddy tells us in the Christian Science textbook, Science and Health, "Creation is ever appearing, and must ever continue to appear from the nature of its inexhaustible source." Science and Health, p. 507;

Send a comment to the editors
NEXT IN THIS ISSUE
Testimony of Healing
Christian Science found me working as a medical secretary in the... 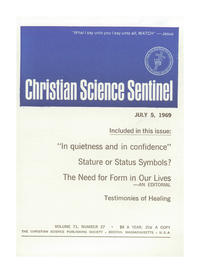