[The above is an abbreviated, postproduction text of the program released for broadcast the week of March 22-28 in the radio series, "The Bible Speaks to You." Heard internationally over more than 1,000 stations, the weekly programs are prepared and produced by the Christian Science Committee on Publication, 107 Falmouth Street, Boston, Massachusetts, U.S.A. 02115.]

RADIO PROGRAM NO. 312 - Overcoming That Trapped Feeling at Work

Questioner: Many people in the business world often feel trapped in their jobs. They don't want to quit, though, no matter how frustrated they feel. Is there anything they can do other than simply put up with the situation?

Speaker: Well, I know what you mean because I've been through a similar situation. But there is another alternative. The Bible is full of accounts of people who felt trapped in one way or another and did succeed in overcoming frustration. Take the children of Israel. After being slaves in Egypt they wandered in the wilderness and were hungry, thirsty, and discouraged. But the Psalmist tells us (Ps. 107:6), "They cried unto the Lord in their trouble, and he delivered them out of their distresses." 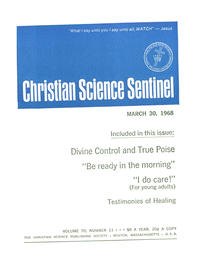