The Wheat and the Tares

So simple are some of Mrs. Eddy's statements of truth, and so self-evident when stated, that their revolutionary nature and their liberating effect on thought when applied to human problems are not always fully recognized. Such a statement is that brief one in Science and Health, which reads, "Like produces like." Science and Health, p. 551

Christ Jesus told the parable of the wheat and the tares, as recorded in Matthew: "The kingdom of heaven is likened unto a man which sowed good seed in his field: but while men slept, his enemy came and sowed tares among the wheat." Matt. 13:24,25 The wheat and the tares are inextricably mingled when growing in the field, but at the time of harvest they are to be separated, the one to be gathered into barns, the other to be burned. 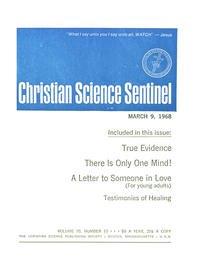