Few things do more to speed or to delay a student's progress in Christian Science than that with which he agrees. Even the extent to which he agrees affects his progress. Only as we agree wholeheartedly with Truth—all of Truth and nothing but Truth—are we able to comprehend and demonstrate the prayer that heals. This agreeing may require years of study and self-renunciation to achieve, or it can be instantaneous, with instant benefits, as was proved by a four-year-old girl some years ago.

The child had been a pupil in the Christian Science Sunday School for six months and had known no other religious teaching. One morning she awakened complaining of an earache. Her mother, eager to have the child demonstrate Christian Science for herself, gave no sign of having heard the small voice from a nearby bed, although she cleared her own thought at once. Presently she arose without a word and left the room. The youngster followed her, still whining that she couldn't hear out of one ear. Her mother, through the closed door of an adjoining room, said firmly, "Now, Mary, you know better than that. Go back and talk to God about this." A surprised Mary, crestfallen at such lack of sympathy, returned to her room. Soon, though, she came out, all smiles. 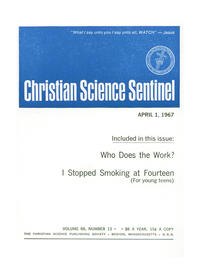