In August of 1963, I was led to attend a Christian Science service...

In August of 1963, I was led to attend a Christian Science service after an absence of over twenty years. It was a case of "man's extremity" being "God's opportunity," for the year immediately past had presented various difficulties as a result of my retirement, such as a lack of activity. The difficulties culminated in nervous exhaustion. Many material treatments and therapies had been tried, and I "was nothing bettered, but rather grew worse" (Mark 5:26).

This church attendance signified a new start. A Christian Science practitioner answered my call and proceeded to stir my thought to a change of base. There was an immediate healing of a heavy smoking habit, and all medication was speedily discontinued with no evidence of any material strain.

Send a comment to the editors
NEXT IN THIS ISSUE
Testimony of Healing
I had the blessed privileges of attending the Christian Science Sunday School... 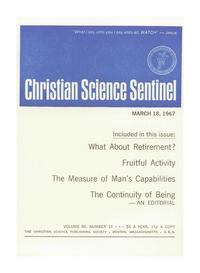