On the air, by radio or television, and in the international press, we are apt to find news of another ugly situation developing in such and such a part of the world. Coming closer home, we read such captions as "Parents and Educators Concerned About Spread of Moral Decay." And coming still closer home—into the family circle itself—we hear of honest-to-goodness affection being blemished by suspicion, marred by ambition, distorted by greed, fear, or present-day confusion.

The best way of dealing with an ugly situation is to beautify it. But true beautification involves far more than any mere transformation of externals, though the externals are apt to express beauty in plenty once the basic spiritual facts of the situation are seen in their right light. 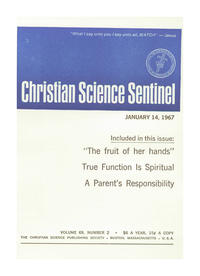