[Of special interest to young men and women]

Readers of all ages love Rudyard Kipling's animal stories. In Kipling's "Jungle Book" his animal characters think, act, and speak as beasts in a humanlike yet definitely animal world. The reader meets the Bandar-log, or Monkey-People, who are always running around starting things they never finish, chattering about the great things they will do, while doing nothing. They follow no leaders and have no sustained purposes.

This characterization of the Monkey-People hints of some of the problems to be overcome in human experience. Sometimes it would seem as though human beings act in somewhat the same way. They mean to accomplish fine things; but following spasmodic urges instead of orderly, well-thought-out plans or zealously attempting overmuch and not following through on any one purpose, they become bogged down in a confusion in which nothing seems to come to fruition. They mean to do well. Even St. Paul said, "The good that I would I do not: but the evil which I would not, that I do." Rom. 7:19; 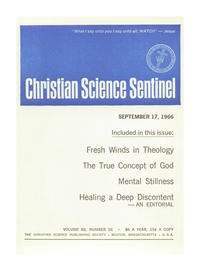