[The above is an abbreviated, postproduction text of the program released for broadcast the week of June 10—16 in the radio series, "The Bible Speaks to You." Heard internationally over approximately 1,000 stations, the weekly programs are prepared and produced by the Christian Science Committee on Publication, 107 Falmouth Street, Boston, Massachusetts 02115.]

RADIO PROGRAM NO. 219 - What Do We Expect from Prayer?

Questioner: Prayer is such an individual thing. I'm sure most people feel the need at times to reach out to a power greater than themselves, and yet people often wonder whether their prayers will be answered, whether they'll be effective.Speaker: I think we need to face the fact that prayer is a very misunderstood word. It isn't like sending an order to a mail-order house or something to do for show. Jesus discussed the subject of prayer many times. And during the Sermon on the Mount he warned his disciples about wrong motives for prayer.

He said (Matt. 6:5, 6): "When thou prayest, thou shalt not be as the hypocrites are: for they love to pray standing in the synagogues and in the corners of the streets, that they may be seen of men. Verily I say unto you, They have their reward. But thou, when thou prayest, enter into thy closet, and when thou hast shut thy door, pray to thy Father which is in secret; and thy Father which seeth in secret shall reward thee openly."Questioner: That still seems to leave quite a bit of room for interpretation.Speaker: How do you look upon prayer? What does it mean to you?Questioner: There are various aspects of prayer, such as praise and adoration of God, but I think of prayer mostly in terms of petition, as I think most people do.Speaker: Well, the Lord's Prayer itself says at one point (Matt. 6: 11), "Give us this day our daily bread," which certainly is a prayer of petition. But don't you think that there can be something much more than merely asking for physical objects in prayer?Questioner: Yes, I do. But what is prayer in Christian Science?Speaker: Prayer could be described as thoughtful reasoning based on what we know about the nature of God and His laws governing the whole of creation.Questioner: Then do you go ahead and enter the closet and shut the door as Jesus did?Speaker: Yes, that's right.Questioner: And by that you get away from the noise and the hurry of the world and people?Speaker: Not necessarily. Entering the closet means striving to fill our thought with an awareness of God and not of our problem. This certainly can be when we're on our own, but we can equally well enter the closet and shut the door when we're right at work in the midst of turmoil. 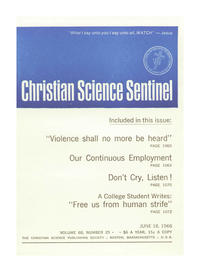