One of the beliefs of materialism is that matter is actually indestructible. According to this belief a stone may one day crumble to dust, or it may become molten lava or a gas; but the atoms still remain. If the atoms are broken up, the elementary particles remain. Even if these disappear, they merely turn into light or other forms of material energy.

The belief that matter is eternal is among the basic errors which must be destroyed, if we are to overcome the influence of materialism on human thought. This belief must be specifically refuted and rejected, then replaced by an understanding of the eternal substance of Spirit. Through the overcoming of the error of belief in matter as substance and power, disease can be healed in Christian Science. Death can be overcome. 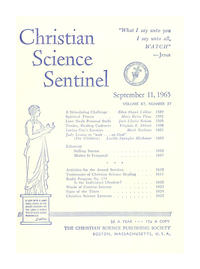