The Light Shineth in Darkness

Two students of Christian Science, while on holiday in Wales, decided to take a walk along a disused railway track. After a while they came to a long, dark tunnel; but because they could see a small speck of light marking the end of it, they decided to walk through the darkness, which they found quite easy, so long as they kept their gaze on the speck of light. If they looked down, however, they began to stumble until they lifted their eyes to the light again.

They soon learned the lesson of keeping their gaze steadfastly on the light, and as they walked resolutely forward, the light appeared larger and brighter until they suddenly found themselves bathed in light, with a breathtaking view unfolding around them. As one of the students stood there drinking in the splendor, he realized that it was their decision to hold the light always in view that brought them out of the darkness. 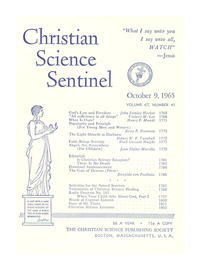