Advantages of Being a Christian Scientist

Sometimes young people are confronted with ridicule or contempt if they maintain high ethical and moral standards. If one follows Jesus' example as Christian Science teaches one to do, in resisting the temptations of the devil, this stand will bring rewards of lasting value, will improve character, increase ability, and bring the best kind of companionship and joy. It is quite possible that the very one who criticizes or ridicules high standards secretly admires those with the courage of such convictions and wishes in his heart that he had the strength to do the same.

A young man who went to college was good-naturedly called lily-white by some of his fraternity brothers because as a Christian Scientist he refused to smoke or to drink liquor. Intoxicants were served in the basement room of the fraternity house. He persuaded them to put in a soft-drink machine so there would be beverages for those who did not want to indulge in the alcoholic drinks that were served.

Send a comment to the editors
NEXT IN THIS ISSUE
Article
Love, the Animating, Life-giving Principle 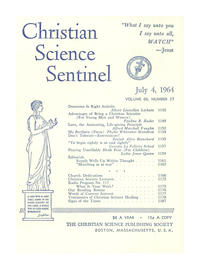