[The above is substantially the text of the program released for broadcast the week of March 13-19 in the radio series. "The Bible Speaks to You." heard internationally over more than 850 stations. This is one of the weekly programs prepared and produced by the Christian Science Committee on Publication, 107 Falmouth Street, Boston, Massachusetts 02115.]

[This is one of two programs dealing with moral standards]

INTERVIEWER: In an article sometime ago in This Week Magazine, the editor said: "Today, as perhaps at no other time in history, young people and their parents are clashing violently over standards of behavior.... The fact is, as every well-informed adult realizes, we are living through a difficult period of shifting sex standards—they have already changed more than most of us want to admit." [Reprinted from This Week Magazine. Copyrighted 1963 by the United Newspapers Magazine Corporation.] Now, this raises a question: Are moral standards mostly a matter of opinion?SPEAKER: They are definitely not a matter of opinion, because there is an unchanging basis for moral standards, a spiritual basis, a basis in divine Truth.INTERVIEWER: What is this spiritual basis?SPEAKER: Perhaps you will agree that our concept of morality goes back to our concept of what man really is. If we accept the basic assumption that man is just a biological organism without any real relationship to God, then we are apt to conclude that morality is indeed merely a matter of social convenience or opinion. On the other hand, if we accept as true the spiritual concept of what man is, that he is made in God's likeness and that his real self is spiritual, then we see that moral conduct is the kind of conduct that tends to bring out more of man's genuine nature, his spiritual selfhood. Whatever would debase an individual, whatever would deprive him of his spiritual identity, his genuine self-hood, is not moral.

INTERVIEWER: This sounds like a very idealistic approach. How does it apply? Young people are exposed to all kinds of things on television, in films, and in literature.SPEAKER: What is involved is perhaps a different kind of education from that which you have referred to, the kind of education we get when we turn to the Bible for the answers to our deepest questions. The Bible gives us the Ten Commandments and the Sermon on the Mount, which provide rules and laws for human conduct. And, as we see it in Christian Science, these rules and laws are just as unchanging as the multiplication table, because they are based on eternal law, on spiritual law, the law of God. 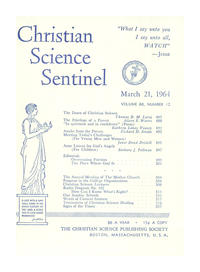