Man Is the Image and Likeness of God

What relationship, if any, exists between man, who is presented in the first chapter of Genesis in the Bible, and the man spoken of in the second chapter? This has been a matter of theological conjecture for ages.

Only through an extremely speculative interpretation of Scripture can it be said that these two accounts present the same man—perfect in the beginning, then falling into sin through disobedience. To assume that the second account is a continuation of the first is to become hopelessly bogged down in a theory that can never divest itself of confusion and contradiction, nor can man, made in the image and likeness of God (see Gen. 1:26), be compared in any way with man formed of the dust of the ground (see Gen. 2:7). The teachings of Christian Science make this fact clear, not only in logic but as a basis of demonstration. 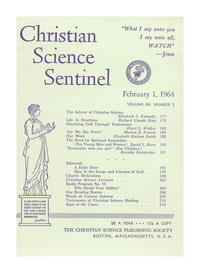