I am grateful Christian Science...

I am grateful Christian Science teaches the spiritual meaning of substance. I was brought up in a large family where frugality and thrift were major concerns. I thought the supply of the world was a limited thing. I recall how grateful I felt when I first realized through the teachings of Christian Science that abundance for one person does not mean lack for another, but that all may have wealth even as all may have health because wealth stands for a state of spiritual consciousness.

However, through the years I practiced wise economy, and as a result I was able to retire early from my profession. Shortly afterward I lost practically all my worldly accumulations through what the courts declared to be grand theft. Not only was this a heavy blow financially, but it was particularly saddening because the perpetrator was a man who, I thought, had been a dependable friend for twenty-five years, and because others, trusting my judgment, had gone to him and suffered loss also.

Send a comment to the editors
NEXT IN THIS ISSUE
Testimony of Healing
It has long been my wish to express... 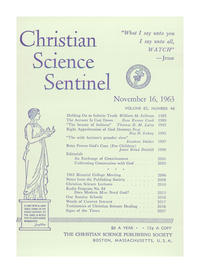