Although I had received a...

Although I had received a sound elementary education, I grew up in fear of doing things and of making mistakes. I was nervous and self-conscious. After being led to the study of Christian Science, I gradually gained more confidence when I learned of man's true selfhood as an idea of God, divine Mind. I constantly acknowledged my oneness, or unit, with this Mind, the source of all intelligence, and knew that, in the words of St. Paul (Phil. 4:13). "I can do all things through Christ which strengthength me."

Almost twenty years after leaving school, I was led to prepare to take a matriculation examination in five subjects instead of taking a contemplated refresher course in typewriting. Among other things, I began to study two branches of mathematics which I had not been taught at school. The upshot was that at the first examination I failed only in mathematics. Later, on obtaining a pass in this subject also, I satisfied the minimum entrance requirements of a university. 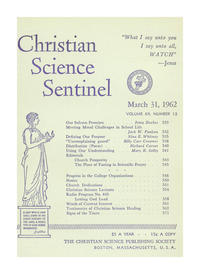