I am convinced that there is no...

I am convinced that there is no discordant condition which cannot be healed by Christian Science, if it is rightly applied.

One day, when skiing in Canada, I had several hard falls, but I gave little thought to them until a few days later when evidence of internal injuries appeared. Although I knew that, as Mrs. Eddy states on page 424 of Science and Health, "Under divine Providence there can be no accidents, since there is no room for imperfection in perfection," I was apprehensive about a proposed skiing trip to Austria; so I asked for the help through prayer of a Christian Science practitioner. This was given, and all my doubts about the wisdom of skiing again were dispelled.

Send a comment to the editors
NEXT IN THIS ISSUE
Testimony of Healing
Because I have received innumerable... 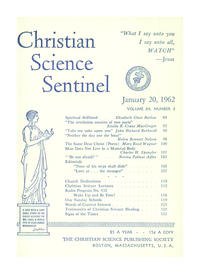