Chestnut Hill, Mass.—Mrs. Eddy's late residence at 400 Beacon Street contains an exhibit room on the second floor where items tracing the growth of the movement from its earliest days to the present are displayed. This house is open daily, except Sunday, from 1 to 5 p.m. to members of The Mother Church, of branch churches, and those who are accompanied by members. During the months of December, January, February, and March the hours are from 12.30 to 4 p.m. It is closed on all holidays with the exception of April 19, May 30, June 17, and October 12. When these dates fall on a Sunday, the house is closed on Sunday and open on the Monday observed as the holiday.

Send a comment to the editors
NEXT IN THIS ISSUE
How Christian Science Heals
RADIO PROGRAM No. 413 - God's Law of Healing 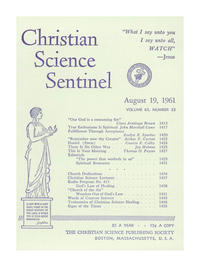