Many faulty traits of character...

Many faulty traits of character have been corrected in my life, and for this I am grateful. I have had broken bones set without the aid of a doctor. They knit perfectly. I also had a healing of a severe case of blood poisoning. These healings came about by my complete reliance on God.

For several days I had been uncomfortable because of constipation. Suddenly at bedtime the condition righted itself after I had read the Lesson-Sermon from the Christian Science Quarterly. Then I remembered reading from the Sentinel an editorial in which a helpful passage was quoted from "Miscellaneous Writings" by Mrs. Eddy. I pondered the quotation carefully, and I recalled saying aloud, "I see that." I am sure that at that moment I was healed, but it was not revealed to me until some hours later. 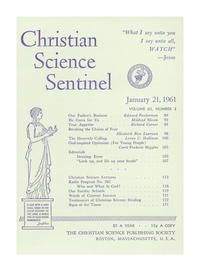