[The above is substantially the text of the program released for broadcast the weekend of September 16—18 in the radio series, "How Christian Science Heals "heard internationally over approximately 700 stations. This is one of the weekly programs produced by the Christian Science Committee on Publication, 107 Falmouth Street, Boston 15, Massachusetts.]

RADIO PROGRAM No. 366 - The Transforming Power of Divine Spirit

SPEAKER: Just for a moment let's turn our thought backward through the centuries to a.d. 56 and the city of Corinth. It is winter; the Apostle Paul is writing a letter to the Roman Christians. It's an inspiring letter, reminding them of God's love for man and admonishing them to accept and live the teachings of Christ Jesus. The Bible tells us Paul also besought them, saying, "Be not conformed to this world: but be ye transformed by the renewing of your mind, that ye may prove what is that good, and acceptable, and perfect, will of God."

Nineteen centuries have passed since Paul first wrote those words, but his message is as applicable for us today as it was for the Christians in Rome. The transforming power of God, divine Spirit, of which Paul wrote is still present today. In fact, it is available not only for the correction of wrongdoing, or character regeneration, but for the healing of disease as well. 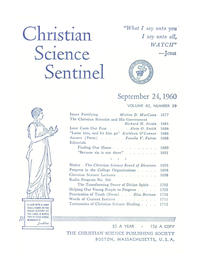