Mary Baker Eddy writes in "Rudimental Divine Science" (p. 9), "The spiritual power of a scientific, right thought, without a direct effort, an audible or even a mental argument, has oftentimes healed inveterate diseases." This truth was proved to me in my first healing in Christian Science.

My sister had asked me if I would accompany her to a service in a Christian Science church. I went reluctantly, for I was satisfied with the church that I then attended. We went to Wednesday evening testimony meetings a few times over a period of about two months. Then suddenly I became ill with scarlet fever, complicated by kidney trouble. The kidney trouble was a return of a condition from which I had suffered as a young girl, and the doctor considered it serious.

Send a comment to the editors
NEXT IN THIS ISSUE
Testimony of Healing
A number of years ago, when I... 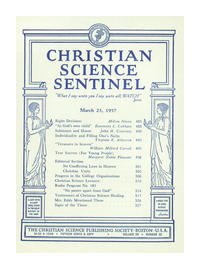