In "Science and Health with Key to the Scriptures"...

In "Science and Health with Key to the Scriptures" Mary Baker Eddy writes (p. 570): "Millions of unprejudiced minds—simple seeker for Truth, weary wanderers, athirst in the desert—are waiting and watching for rest and drink. Give them a cup of cold water in Christ's name, and never fear the consequences." In the year 1935, in an hour of great need, my wife and I were given "a cup of cold water" in the form of a Sentinel by a friend whom I have known since boyhood. At this time plans were being made, because of my ill-health, to put our four children in a children's home, thus breaking up our family.

My friend and his wife invited my wife to a Wednesday evening testimony meeting and a Sunday service, both of which she attended. Later on, Christian Science literature was sent to me in a sanatorium over a hundred miles away. where I had been sent after spending several months in bed at home and in a city hospital. I was told I needed a change of climate to regain my health, as I had tuberculosis. After spending nine months at this institution I was told that I was no better and would have to go back to the city hospital for an operation and then go to another sanatorium for a year or more before I would be able to return to work.

Send a comment to the editors
NEXT IN THIS ISSUE
Testimony of Healing
I found Christian Science at a... 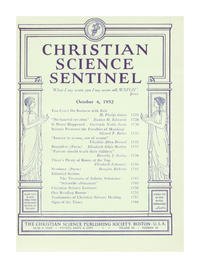