There is no substitute for forthrightness. Wisdom may temper the direction of courage, but the tempering renders courage more focused, more effective, not less courageous. Acceptance of this fact and willingness to live in accord with it have the full commendation of Mary Baker Eddy, Discoverer and Founder of Christian Science, which is the Comforter Christ Jesus promised would become available to men. Delivering an obvious rebuke to cowardice, under whatever pretext it may seek to justify itself, Mrs. Eddy asks and answers the significant question (Miscellaneous Writings, p. 210): "Do men whine over a nest of serpents, and post around it placards warning people not to stir up these reptiles because they have stings? Christ said, 'They shall take up serpents;' and, 'Be ye therefore wise as serpents and harmless as doves.'" She goes on to make clear that Christian Science shows the way to bring the reptile out of its hole and handle it by rendering it harmless.

This point of view, based as it is on spiritual perception and not on human philosophy or psychology, is a rebuke to the seemingly widespread modern notion that about the most unwise thing that one can do is to speak out openly for one's convictions if there seems to be a possibility that retaliation can injure him. The inference is, plainly and falsely, that there is virtue in abandoning the spiritual course of stirring up the serpents and rendering them harmless if it appears that they have stings. It is a pronouncement of support for desertion of right activity whenever aggressive opposition claims it can render right activity unpleasant. Its general acceptance is a threat against the competence and integrity of men. 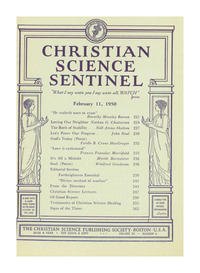