No pushing, no scrambling. A path breaks through a "valley in Kashmir"

In the course of an extended trip in a distant part of Kashmir some yea is ago, the writer found himself one evening seemingly trapped in a narrow, winding valley which was choked with dense undergrowth and down which roared a torrent of snow water. He knew his camp had gone on ahead and would, be somewhere near, but until he could find a way out of the valley, he could see nothing. It was late, a cold rain was failing, and the prospect of spending the night crouched under a rock was not inviting. Time and again it seemed that the valley must open out or the slopes become less steep, so that he could climb out of the bed of the stream, but each corner he turned he found only the ground he had already traversed and another corner a short way ahead. Then suddenly the valley was lit by a shaft of light from the late evening sun, the clouds broke up. and the weary traveler saw open ground ahead. A few minutes more, and he was in easy, open country, and in the distance he could see his tent already pitched and the inviting glow of a campfire.

Remembering this incident in after years, he was struck by its similarity with his later mental experiences in his passage out of the valley of material modes of thought. The little valley in Kashmir—narrow, choked, obstructed—gave a faithful picture of his material life, cluttered up with fears and limitations of all kinds, more especially the cares and worries incidental to the business of earning a living. Often he thought he had arrived; but each corner he turned he came upon ground he had already covered many times, until at last the rain and the mist of muddled material thinking cleared from his consciousness and the light of true Science—the knowledge of God and of man's real being—appeared. Then he saw his way clear before him and felt the warmth and love of his Fathers welcome.

Send a comment to the editors
NEXT IN THIS ISSUE
Article
DON'T LOSE THE KEYNOTE OF BEING! 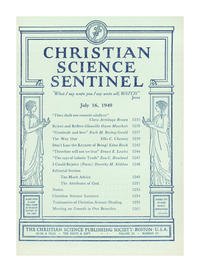