SOUL AND ITS EXPRESSION

Before the discovery of Christian Science, Soul was seldom, if ever, employed as a synonym for God. Mary Baker Eddy found authority in divine revelation for so using it and has greatly enriched our understanding of God and man by her explanations of the office of God as Soul and of man as Soul's expression. Her revelation that man is God's image, soulful and spiritual rather than sensuous and material, opens glorious vistas of manhood which heal humanity and bring to light man's existence in Soul as the active embodiment of good. In "Science and Health with Key to the Scriptures" Mrs. Eddy writes (p. 477): "Man is the expression of Soul. The Indians caught some glimpses of the underlying reality, when they called a certain beautiful lake 'the smile of the Great Spirit.'"

The man of Soul's creating expresses the beauty of Love's goodness, the power of Spirit's tenderness, the authority of Principle, the fidelity of Truth. Soul is the source of his individuality, and spiritual sense or consciousness makes up his eternal selfhood, which emanates from Soul. It is Soul's sinlessness that makes man immortal, for that which is sinless is free from destructive forces and is manifest in man's immutable perfection. Christ Jesus saw beyond the limited impressions of the material senses into the heavenly kingdom, where Soul is in perpetual control. He brought eternal life within reach of mankind by demonstrating man's spiritual perfection as God's son. He proved that immortality is ever present and that it is gained, not by dying, but by living sinlessly. 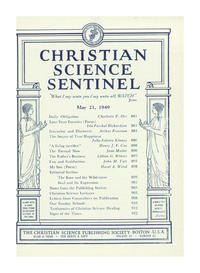