WHAT OF OUR METAPHYSICAL WORK FOR CHURCH?

By the time these words appear in print, many newly elected First and Second Readers will have begun their sacred periods of service in Christian Science churches; and it is to be hoped that their fellow members are doing their part in making the readership experience a happy, fruitful one. Just what, then, can a fellow member do to be helpful to those whom his church has voted into office?

First of all, he can keep his lips from hasty judgment and non-constructive criticism. The story is told of a new preacher in a certain church who, looking down from the pulpit, discovered three people in the front pew taking notes as the service progressed. Later, asking who they were and what they were doing, he was informed that they were "the Committee on Mistakes"! Now, fortunately, no Christian Scientist has to consider himself a member of such a committee. His is the wholesome task of mentally holding up the hands of every servant of the church, and he does this most effectively when his thought is lifted away from person to the realization of God's intelligent government of His ideas. If a Reader asks a competent critic for constructive aid, well and good; but for a self-appointed steadier of the ark to keep offering gratuitous advice as to how reading should and should not be done is, to say the least, a breach of good manners. 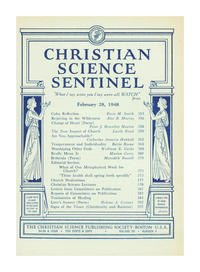