How Does Christian Science Heal?

The fact that Christian Science heals is now established beyond all doubt, and is generally admitted even by those who do not accept its teaching. However, it is often only when all material methods have failed that, like the woman who "had suffered many things of many physicians, and had spent all that she had, and was nothing bettered" (Mark 5:26), the sick and weary one turns to Christian Science and asks, "How does Christian Science heal?"

This Science heals as Jesus healed; that is, by the understanding, application, and demonstration of spiritual law—God's law— in human affairs. Jesus said (John 6:63), "It is the spirit that quickeneth; the flesh profiteth nothing," and this statement he proved by annulling every commonly accepted belief of material law. He walked on the water, demonstrating that spiritual not material law is the only law. He fed a great multitude with a few loaves and fishes, annihilating the belief of lack and demonstrating the infinite, ever-present supply of Spirit, divine Mind. He stilled the waves, gave sight to the blind, hearing to the deaf, feet to the lame. He raised the dead, and finally triumphed over death, the "last enemy."

Send a comment to the editors
NEXT IN THIS ISSUE
Article
What Is Your Portion? 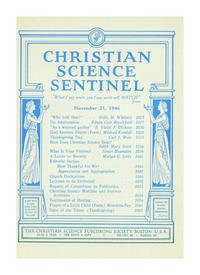