Man Is Never in a Hurry

When a Sunday school teacher asked a thoughtful pupil to name an outstanding quality of Jesus, the girl quickly replied, "His poise." The Master never showed irritation, was never at a loss as to how to act, or as to what to say, and he was never in a hurry. There was time to turn away from the insistent press of the multitude and with deliberation to seek out the timid one who had touched his garment and been healed. There was time to give to the little children whom others would have kept from him. Though a world was needing salvation, there was time to linger at Jacob's well and converse with the woman of Samaria about quenching one's thirst. This exemplar of reality never accepted the belief that he was in the mental state called "a hurry," well defined by Webster as "flurried haste."

The sense of rush and hurry so common in modern industrial, business, and home life is rooted in fear. Often it is fear that someone will get ahead of us, or that what we have to do will soon overwhelm us if we do not do it in a hurry. Life is thought of as a race against time and men instead of the orderly unfoldment of true ideas. He who does not race, believes he will soon be outdistanced. Then there is the profit motive which says you must hurry in order to get. If you do not hurry, you will not get. Material thought, feeling its insufficiency, attempts to save itself from its own inadequacy by hurrying to get money and things. It sometimes seems to put more trust in hurry than in God. 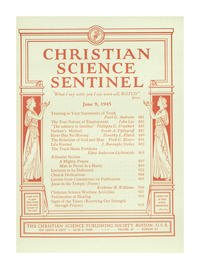