Mrs. Elisabeth F. Norwood, C.S.B., was born in Roxbury, Massachusetts. Her father, Isaac Paul Gragg, served throughout the Civil War and was given the rank of Captain by Brevet for gallant and meritorious services. Her mother, Mrs. Eldora O. Gragg, C.S.D., was one of twelve of Mrs. Eddy's pupils chosen by her to form The First Church of Christ, Scientist, in Boston, Massachusetts. Mrs. Eddy also appointed Mrs. Gragg as the first woman Reader in The Mother Church, where she read for over seven years. 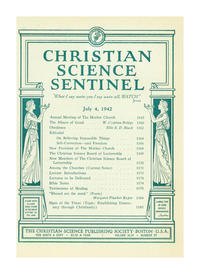