The taking of medicine was a...

The taking of medicine was a part of my daily routine from infancy. It was predicted that I should always be troubled with an intestinal disorder which I had inherited from my mother, who in early life succumbed after a long illness, said to have been indirectly caused by the same complaint. As I grew, other complications arose and developed into chronic ailments; so at maturity I had come to believe that my life was dependent upon material aids. Later, a distressing condition called bronchial asthma appeared. Several worthy physicians and one specialist said that it was incurable because the cause was unknown. Their prescriptions were offered, not to cure the malady but to counteract the attacks; in addition, I turned to cigarette smoking on the suggestion that the inhaling of the fumes might alleviate the suffering.

A business difficulty of large proportions brought me to Christian Science, and the problem was solved within thirty days through an unexpected turn of events. Thereafter daily business situations were worked out through the application of Christian Science. However, it did not appeal to me as a religion, for I had been active in church work in another denomination all my life up to the time of entering the business world, a step which took me from the town where I held church membership. To give up the use of medicine and faith in its corrective power was not easy to contemplate, but my increasing physical discomfort brought a more serious consideration of Christian Science. I had long since stopped dosing for asthma, for the remedies had become ineffective and often brought on other discomforts, but the use of remedies for functional disorders seemed very necessary, and dire consequences suggested themselves at the thought of discontinuing them.

Send a comment to the editors
NEXT IN THIS ISSUE
Testimony of Healing
It is a pleasant duty and privilege... 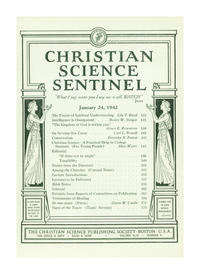