The efficacy of Christian Science has been proved to me...

The efficacy of Christian Science has been proved to me in many ways over a period of twenty-one-years. In a family of five, all manner of illnesses have been overcome—measles, chicken pox, carbuncles, cuts, bone lacerations, and punctures from rusty nails; the proper replacement of a genital organ was accomplished after the physician had said the condition was so serious that it would be necessary to go to the hospital for ten days. One child was sent home from school with double pneumonia, but with the aid of a consecrated practitioner she was back in school within a week. Another daughter had been an invalid for seven years with a complication of ills. The best physicians from several states were called in for consultation at various times, each declaring the case was incurable. When Christian Science was prayerfully applied, and our reliance placed on the one and only creator, the only power, she was healed in a few days. The healing has been permanent. When it was necessary for her to have a physical examination upon entering high school, the physician who had originally been in attendance on her case said the healing was nothing short of miraculous.

In my own experience, a felon, sprained ankle, hay fever, and a triple breakage of bones in the arm have all been completely healed. In the last-named instance it was predicted by the physician that I would be entirely deprived of the use of hand, and he feared that an attempt to set the arm might result in the breakage of the shoulder blade and collar bone, which were both cracked. Gratefully I rejoice that, with the help of a faithful worker, in five weeks I was using the hand as naturally as before. During this experience I held constantly to the thought expressed by Mrs. Eddy on page 571 of Science and Health, "The cement of a higher humanity will unite all interests in the one divinity." Once when I willingly obeyed a call to go to another city where my services were needed, the pain of separation from a group of loved ones was entirely overcome by applying what Mrs. Eddy says (The First Church of Christ, Scientist, and Miscellany, p. 131): "Where God is we can meet, and where God is we can never part."

Send a comment to the editors
NEXT IN THIS ISSUE
Testimony of Healing
Christian Science came to me when I was in great need.... 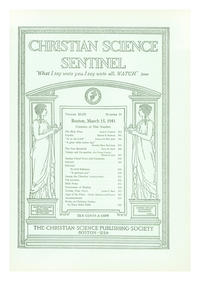