Some twelve years ago I was despondent, weak, and ill

Some twelve years ago I was despondent, weak, and ill. My small son was considered delicate, and was under almost constant medical attention. I had ceased attending the orthodox church, because it failed to satisfy my longing for some sure rock or foundation. Such was the condition of affairs in my life when Christian Science, with its simple and demonstrably true revelation of God as Love, was brought to my attention. I sent my boy to the Christian Science Sunday School, and began to study the textbook, "Science and Health with Key to the Scriptures" by Mary Baker Eddy. In a remarkably short time this beautiful religion brought not only comfort, but also healing to me and to my boy. Since the day he entered the Sunday school he has not taken medicine or turned to a doctor, except when examined on entering the Australian navy. His brothers and sisters have likewise derived great benefit from attending the Sunday school.

In the years since I took up the study of Science, many have been the occasions when urgent physical needs have been quickly and completely met by the application of Christian Science to the problem. Among other ills, measles, whooping cough, and influenza were quickly overcome.

Send a comment to the editors
NEXT IN THIS ISSUE
Testimony of Healing
It is with a heart filled with gratitude that I give this... 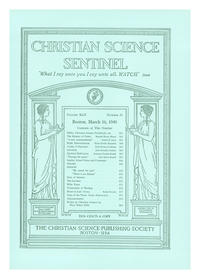