For years I had been satisfied with the theory, held by...

For years I had been satisfied with the theory, held by certain leading psychologists, that Christian Science was merely a form of healing brought about by self-mesmerism, but when I saw the regenerating influence of a healing on the life of a friend, I realized that this must be a religion with power, and I was ready to read the textbook, Science and Health by Mrs, Eddy, without prejudice.

The beautiful reasonableness of Mrs. Eddy's explanations regarding prayer deeply impressed me, and I eagerly read the book through in a fortnight.

Send a comment to the editors
NEXT IN THIS ISSUE
Testimony of Healing
"And the earth was without form, and void; and darkness... 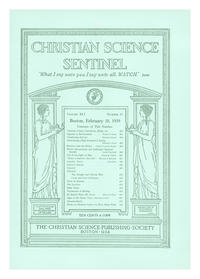