With the hope of helping someone, I am grateful to...

With the hope of helping someone, I am grateful to testify that in the beginning of my study of Christian Science, and with the aid of a practitioner, I was quickly healed of irritation of the bladder. The healing took place twenty-two years ago, and has been permanent. A short time later I was healed of severe nose and throat trouble. The doctor diagnosed the ailment as a growth in the nose which would have to be removed. I had no operation or medical treatment. All sense of taste and smell was lost for about six weeks, until I received an instantaneous healing through Christian Science. Another healing which I received was of a severe nervous breakdown. Half my body, from head to foot on the right side, was partially numb. At times it seemed that I would have to give up, but the "still small voice," told me to arise, dress, and study the Lesson-Sermon, if I wished to prove Jesus' teachings. So-called mortal mind argued that I was too far gone to get up. But the angel voice said: Be obedient, Arise! All power is given to God's child, and you can prove it. Study the promises of God. A verse from Psalm 118came very clearly to me, "I shall not die, but live, and declare the works of the Lord." I realized that experiencing sickness was not proving Jesus' teachings, for he came to destroy sickness and discord, and his work could not be lost. I knew that God is good; that His will must be good; and that my duty was to claim the kingdom of health, harmony, and happiness, which were my divine birthright, as His beloved child. God indeed talked to me, and I was healed when I took my stand and was obedient to Truth.

Other difficulties, such as influenza, severe cold on the lungs, stomach disorders, insomnia, loneliness, and melancholy, have all been healed through my understanding of God and His laws. I am grateful for other healings which have come under my observation. I have always found Truth victorious, when properly applied. I am thankful to God for what Mrs. Eddy has done for the world.

Send a comment to the editors
NEXT IN THIS ISSUE
Testimony of Healing
During the ten years that I have been studying Christian Science... 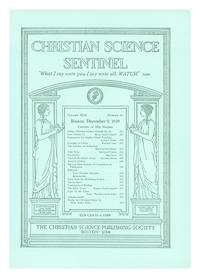