Appreciation of and gratitude for Christian Science lead...

Appreciation of and gratitude for Christian Science lead me to offer this testimony for publication.

In 1931 I began to suffer from stomach trouble, and in the following year my condition became a source of alarm. The medical diagnosis showed falling of the stomach and dilatation. In spite of the most careful treatment and the daily exposure to X rays, which the doctor highly recommended, I grew perceptibly thinner. I lost courage and turned away from him, trying to cure myself with nature healing methods. But things grew continually worse, and since I was plagued by frightful pains, I entrusted myself to another doctor, who discovered ulcers of the stomach in addition to the old trouble. This doctor advised an operation, saying that my life was in constant danger. I rebelled against this, however, very strenuously. In January, 1933, I had a severe attack of gastric hemorrhage. From then on my existence was a torment. My stomach would not take the little that I was still allowed to eat. After barely a month there was a second attack of this trouble, which so weakened me that I had to stay in bed constantly. The doctor urged an immediate operation, but I still rebelled against it.

Send a comment to the editors
NEXT IN THIS ISSUE
Testimony of Healing
It has been more than thirty-five years since Christian Science... 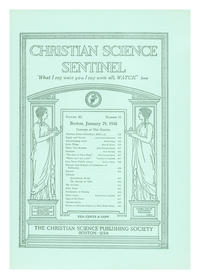