In the thirteenth chapter of the Gospel according to St. John it is stated that Jesus, laying aside his garments, girded himself with a towel and washed his disciples' feet, wiping them with the towel with which he was girded. Here is illustrated, so far as human customs are concerned, the extreme in contrasts. Jesus was far superior to any that had ever associated with mortals. Through his victories over the material senses, he had risen higher than his disciples were then capable of appreciating. Yet, from the human viewpoint, he stooped to perform this menial service—an act that seemed almost startling. It was, therefore, quite natural that it brought from the impetuous Peter the declaration, "Thou shalt never wash my feet."

But as the larger understanding of our Master's life and mission unfolds in consciousness, the contrast seems to fade and melt into the beauty and importance of the lesson it furnishes, a lesson on humility and love. When he had finished he said to them, "If I then, your Lord and Master, have washed your feet; ye also ought to wash one another's feet." In other words, if he, their Lord and Master, had attained such humility as to enable him to destroy sin, disease, and death—the beliefs of mortal mind—they should do likewise. Thus did he explain his motive and clinch the lesson. 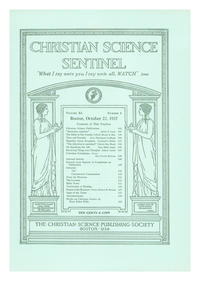