An anonymous correspondent in your last issue expresses...

An anonymous correspondent in your last issue expresses somewhat confused views on the subject of Christian Science, and on the age-long enigma as to the so-called origin of evil. While not wishing to arouse or enter into any religious controversy, I shall be glad if you will kindly accord me space for the following statement, which may throw some light on the subject for those of your readers who may be interested.

In "Miscellaneous Writings" (p. 346), Mary Baker Eddy writes as follows: "The origin of evil is the problem of ages. It confronts each generation anew. It confronts Christian Science. The question is often asked, If God created only the good, whence comes the evil? To this question Christian Science replies: Evil never did exist as an entity. It is but a belief that there is an opposite intelligence to God." And in reply to the question, "Who or what is it that believes?" Mrs. Eddy writes (Science and Health with Key to the Scriptures, p. 487): "Spirit is all-knowing; this precludes the need of believing. Matter cannot believe, and Mind understands. The body cannot believe. The believer and belief are one and are mortal." This is in accordance with the teachings of Christ Jesus, who said of evil, "When he [devil, evil] speaketh a lie, he speaketh of his own: for he is a liar, and the father of it;" that is, evil is a lie, an illusion without real origin or cause, seeming to be true only to itself. 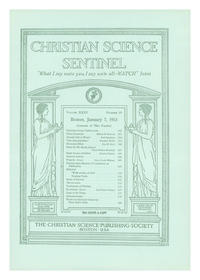