Last year, in London, there was published a book by...

Last year, in London, there was published a book by John Bevan, well-known English writer, containing his answers to questions on modern religious problems and other subjects. The following was one of the questions: "Could you give me the names of some books written against Christian Science?" His answer began as follows: "I am not acquainted with any books written against Christian Science. Even if I were, I would not tell you of them, because, on principle, I think it is unwise to learn of a movement from its enemies." The foregoing statement is pertinent because the Jewish Advocate has published an article by a writer who mentioned and practically recommended books which were evidently written by enemies of Christian Science. In the same article, the same writer wrote as if Christian Science denies the oneness of God. In fact, the oneness of God is consistently declared throughout Mrs. Eddy's writings. Even when the writer in question quoted the words, "God, Spirit, being all, nothing is matter," from page 113 of "Science and Health with Key to the Scriptures," he could have seen the words "the infinite One" on the preceding page. Christian Science does not teach that God consists of three persons.

Attempting to criticize the logic of Christian Science, the same writer indulged in the following comment: "Apparently God must have pain and suffer evil since His 'being all' precludes the chance for any other being to exist." Logically, what the oneness of God precludes is the reality of aught that does not reflect Him. To comprehend Christian Science, as Mrs. Eddy has said, "you must begin by reckoning God as the divine Principle of all that really is" (Science and Health, p. 275). Kindly allow me also to inform your readers that Christian Scientists do not "abuse and despise the entire medical profession." On the contrary, the attitude of Christian Scientists toward the medical profession as a whole is one of respect and good will.

Send a comment to the editors
NEXT IN THIS ISSUE
Article
In an article entitled "Health Notes" in a recent issue... 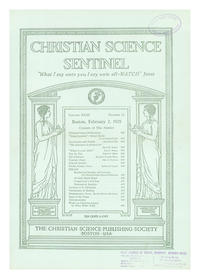