Christian Science does not deny any of the teachings of...

Richard H. Smith, Committee on Publication for the State of Montana,—Lewiston

Christian Science does not deny any of the teachings of God and is not leading souls to hell, as was stated by a preacher in a sermon recently reported by you. It would not be possible to mention a single teaching of God which Christian Science denies. On the contrary, our religion is based upon the supremacy, omnipotence, and omnipresence of God. I quote one of many statements by Mary Baker Eddy, the Discoverer and Founder of Christian Science, as proof: "Divine metaphysics is that which treats of the existence of God, His essence, relations, and attributes. A sneer at metaphysics is a scoff at Deity; at His goodness, mercy, and might" (Miscellaneous Writings, p. 69).

The Christian Scientist's concept of hell is given on page 588 of "Science and Health with Key to the Scriptures" by Mrs. Eddy, and, broadly speaking, it is sin, sickness, and discord of every nature. Of these experiences mortals partake here and now. One only needs to observe the effect of the practice and application of their religion by Christian Scientists, to discover that it does not produce in them sin, sickness, or discord of any kind. On the contrary, health, peace, and a higher sense of Christian living flow from its practice. Christian Science is not "leading millions of souls to hell," but is bringing heaven in a very large measure into the lives of those who practice it.

Send a comment to the editors
NEXT IN THIS ISSUE
Editorial
The writer of the article entitled "Modern Substitutes for... 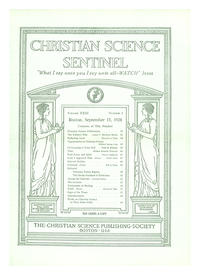