OF all the precious lessons left to us by Christ Jesus—a rich legacy—none is more graphic, or more imperative in its appeal to awaken and arouse thought to the need of spiritual understanding and an active obedience thereto, as the foundation upon which to build for eternity, than his comparison between the structures of the wise and the foolish. The former built his house upon a rock, and when "the rain descended, and the floods came, and the winds blew, ... it fell not;" while the latter foolishly built his upon the sand, and when beaten upon by the same rough elements, it fell utterly. The wise one had heard the sayings of Jesus and acted upon them; while the foolish one had heard them, but had given no head thereto. This is a stirring illustration of the need of knowing and obeying the commands of Christ Jesus as a basis for winning eternal life.

Upon another occasion Jesus spoke of the one who "began to build, and was not able to finish," the one who proceeded to build without first counting the cost, and who advanced no farther in his operation than the laying of the foundation. This was probably to emphasize the fact that in building for eternity there is a cost to be considered, a cross to be borne; that to work out one's salvation necessitates the giving up of material beliefs, in order to make room for the entrance of spiritual truth into consciousness, and the giving of time for its contemplation and demonstration to make its development sturdy. 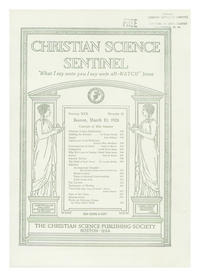