A doctor, writing in your issue of recent date, makes some...

A doctor, writing in your issue of recent date, makes some assertions about Christian Science which are neither warranted nor true. Christian Science does not attack other churches, as he asserts; it only answers in a kindly manner attacks made upon it by others. Prejudice and misrepresentation on the part of critics never keep honest people who are not satisfied with their own beliefs from investigating the religious beliefs of others. In fact, it has been found by experience that exaggerated statements, such as the critic has indulged in, cause many people to look into the subject of Christian Science for themselves.

Christian Science is the truth as taught and demonstrated by Christ Jesus. It is Christian, for it fulfills the command of the Founder of Christianity and performs works of healing and regeneration by the same spiritual method. It was through spiritual understanding that sin, disease, and death were destroyed by Christ Jesus, and it is in the proportion that a Christian Scientist gains the Mind of Christ that he is enabled to emulate these works to-day. Christian Science is scientific because it is susceptible of proof. The fact that our critic has not been able to prove this does not entitle him to lay aside as unscientific the evidence of millions who have. Those who come to Christian Science find their doubts removed, a demonstrable religion, a clearer understanding of God and of man's relation to Him, and a keen desire to study the Bible in order to gain its spiritual meaning, thus enabling them to overcome sin and disease through spiritual means.

Manager of Committees on Publication for Great Britain and Ireland,

Send a comment to the editors
NEXT IN THIS ISSUE
Article
A correspondent says: "It would be well if Christian Science... 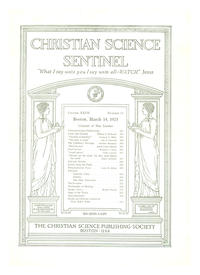